It would shut down nearer cars and airplanes, but trains would still be around. Banking would be down probably, but water and electricity would still be up. 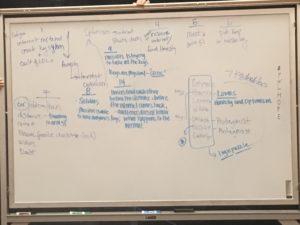 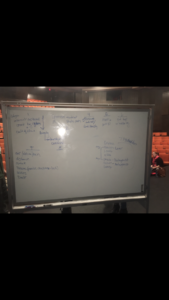 I know originally we had said that only the Internet would go down. According to the key scenario, the Internet wouldn’t actually be completely unusable. I think for the purposes of convenience to us as the writers, and to make it more easily understood by the audience, that all digital technology should be unusable. Possibly some type of emp is the cause, although the cause of it is up for debate. Having a scenario with no technology would limit the story to not having and planes, or gas engine cars, so we would need to take that into consideration.

For our scenario, I think that shutting down the internet should also involve shutting down anything that uses electricity and any device that uses radio waves for communication except for perhaps the most primitive of radios. However, while the internet shut down should be permanent until the keys are activated, I think that some things using electricity should be able to be restarted.

For example, electric cars or car starters would shut down in the initial event, but they could be fixed by anyone with knowledge of how to fix electronics. However, things like the a city’s electrical grid would be harder to fix due to all radio wave based communication going down alongside the Internet and the sheer complexity of the system.

This would allow us to explain how the device all the keys go into still works because either one of the soldiers at Area 51 fixed it or one of the keyholders has knowledge in electrical engineering. It could even be Wisdom who gets the machine fixed since he was one of the ones to build it.

How does that sound?

I think we should stop trying to revamp the key holders just keep it how it is and not make our conversations continue into a circle since that is delaying are time to finish better.

I believe that if the internet were to go down it should go down in the way of having no technology what so ever. No airplanes, trains, buses, cars or modern day phones. No wifi and then it effects everything we depend on. People have to go along with the old times like 1900’s. It makes more room for fantasy to play a rule such as the seven keys that we want to include in the play. The seven keys puts a twist to the play to make room for the fantasy aspect of it all. It puts it all into perspective as to how the overall play should and could function.

Hi everyone….we’re all about stage games, plays, and do-it-yourself theater! This is a place for us to blog about this course.